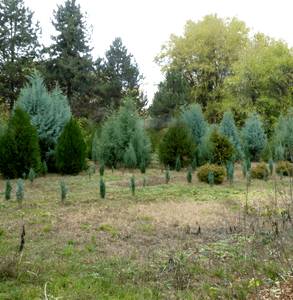 The Forest-Еxperimental Station was established in 1952, by a special act of the Government of SR Macedonia (Official Gazette No. 2) as part of the Faculty of Forestry in Skopje, with purpose to serve for improvement of practical lectures, and for the research and applicative work of the Faculty.

The following facilities are considered as parts of the Forest-Experimental Station:

The area in Trubarevo (the arboretum, hunting ground and other areas) was proclaimed as Monument of Nature by a decree of the City of Skopje, and is under regime of strict protection.

Throughout the years, аproximately 600 autochthonous and alochthonous woody plant species have been introduced in the arboretum and dendropark, and among them many rare and valuable species. By the number of species, it was one of the richest collections in the Balkan Peninsula. Unfortunately, several factors had significant impact on the change of environmental and other conditions (the regulation of the riverbed of Vardar river; opening of several excavations for collection of gravel; building of a nearby railroad track; and especially the big fire of 1993). As a consequence, from year to year, the number of tree species has been decreasing, while financial means and human resources for their maintenance are also in a long-lasting trend of decrease. Lack of infrastructure for irrigation, especially in the park and in the Faculty garden is becoming a serious problem, so that during summer periods a number of susceptible species express symptoms of stress to drought and are less vital health state.

The hunting ground, which is a unit of the Forest-Experimental Station, is situated 5 km East of Skopje, in Trubarevo. In order to fulfill its basic function, its arrangement was started immediately after establishment. On the area covered with forest vegetation, 2 hunting corridors were established in the length of 600 m, and later a number of basic technical hunting accessories and objects were built. The hunting ground was managed according to a game management plan in which the main game animals were hare, partridge and pheasant. The first two species are native, while the pheasant was introduced in 1952. Also, in the hunting ground, practical lessons were held for students. Besides this, in the hunting area there was a two-part adaptation cage of 1000 m2. The basic purpose of this facility was introducing students to handling procedures of production of game by artificial means. Also, the Faculty hunting ground had appropriate equipment for introducing the students to hunting marksmanship and general ballistics.