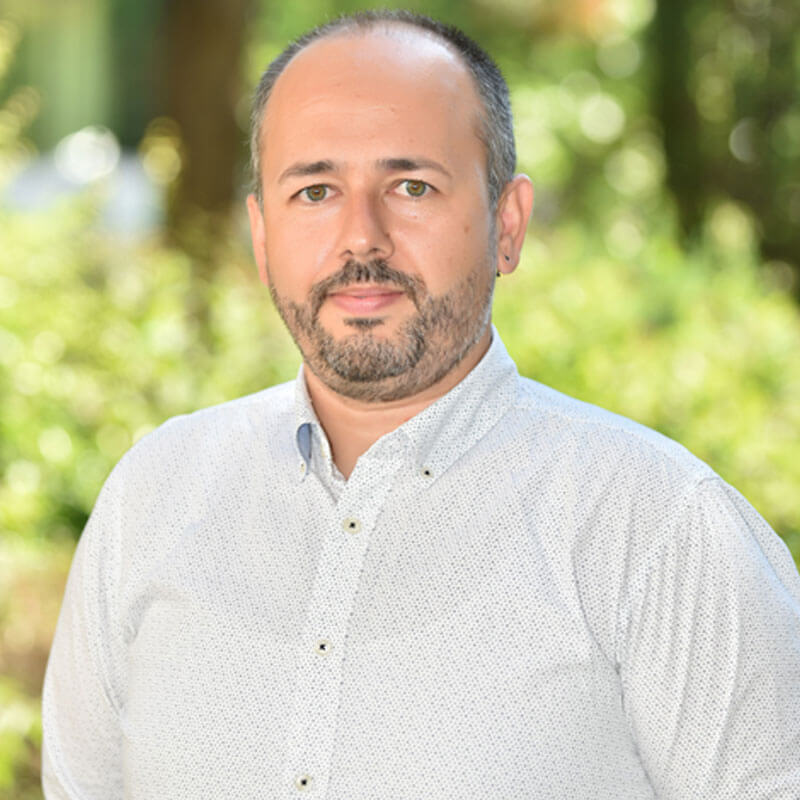 Ass. Dr.sc Mihajlo Risteski was born in 1981 in Prilep. He gratuated at the Faculty of Forestry in Skopje in 2006, in the field of forestry, with a diploma thesis entitled “Vertical transmission of hypoviruses through conidia in isolates of Cryphonectria parasitica Murr. (Barr.)”, which earned him the title of BSc in forestry. In 2011 he publicly defended his master’s thesis entitled: “Vegetative compatibility, mating types and hypovirulence of isolates of the fungus Cryphonectria parasitica from R. Bulgaria” and earned the title of MSc of Forestry. In 2018, he publicly defended his PhD thesis entitled “Distribution and diversity of pathogenic species Phytophthora in the Republic of Macedonia”, which earned him the title of PhD in Forestry.

After graduation he worked in several hunting associations as a forestry engineer-consultant. He was a consultant for the preparation of a report on land reclamation and afforestation of the hydro system. He volunteered at the Faculty of Forestry as a professional associate and professionally built himself, making numerous scientific research visits to eminent scientific institutions and laboratories abroad. Of these: two six-week research visits to the Phytopathology Laboratory at Cornell University in Ithaca, New York, in 2006 and 2007; a six-week research visit to the Poplar and Fast  Growing Tree Research Institute in Kavakçalak, Istanbul, Turkey, in 2006; a three-week and two-week research visit to the WSL Laboratory of Population Genetics and Phytopathology in Birmenzdorf, Switzerland, in 2008 and 2012; 3-week scientific research mission (short term scientific mission) at the Phytopathological Laboratory of Aberdeen University in Aberdeen, Scotland (as part of COST action FP0801). He was an active participant in summer and training schools in the area, as follows: in 2010 in Belgrade, Serbia, in 2013 in Sarajevo, Bosnia and Herzegovina; in 2014, in Oeiras, Portugal; In 2014 in Uppsala, Sweden; in 2017 in Palencia, Spain. He was also an active participant in numerous working meetings as part of COST actions across Europe. Independently and with other authors, he participated in the preparation of several teaching, educational, scientific and applicative activities, as well as actively participated in national and international projects, congresses, conferences, seminars, symposia, workshops and trainings. He participated and collaborated on 8 successfully completed national and multilateral scientific research projects and professional-applied activities of the faculty. In addition to national and international papers and poster presentations, he is the co-author of 8 scientific research papers published in journals with an impact factor.

Since 2020, he has been employed at the Hans Em Faculty of Forest Sciences, Landscape Architecture and Environmental Engineering in Skopje, with a title assistant at the Department of Forest and Tree Protection, scientific research area: phytopathology. He is responsible for performing auditory and laboratory exercises on the subjects in this area. Performs molecular and other professional analyzes in the laboratory for phytopathology, related to the teaching-educational and professional-applied work of the faculty.

Areas of his scientific research interest are: symptomatology, collection, isolation, cultivation and detection of phytopathogenic fungi, with special interest in root fungi. It is used with numerous laboratory techniques, including: lyophilization of cultures, isolation of DNA, sequencing, analysis of phylogenetic three. He is also interested in the phenomenon of biological control in situ using hypo-virus, against chestnut blight caused by the fungus Cryphonectria parasitica.

Identification and production of mushrooms

Basic methods and principles in science